Guillain Barré Syndrome and the End of the NIIP 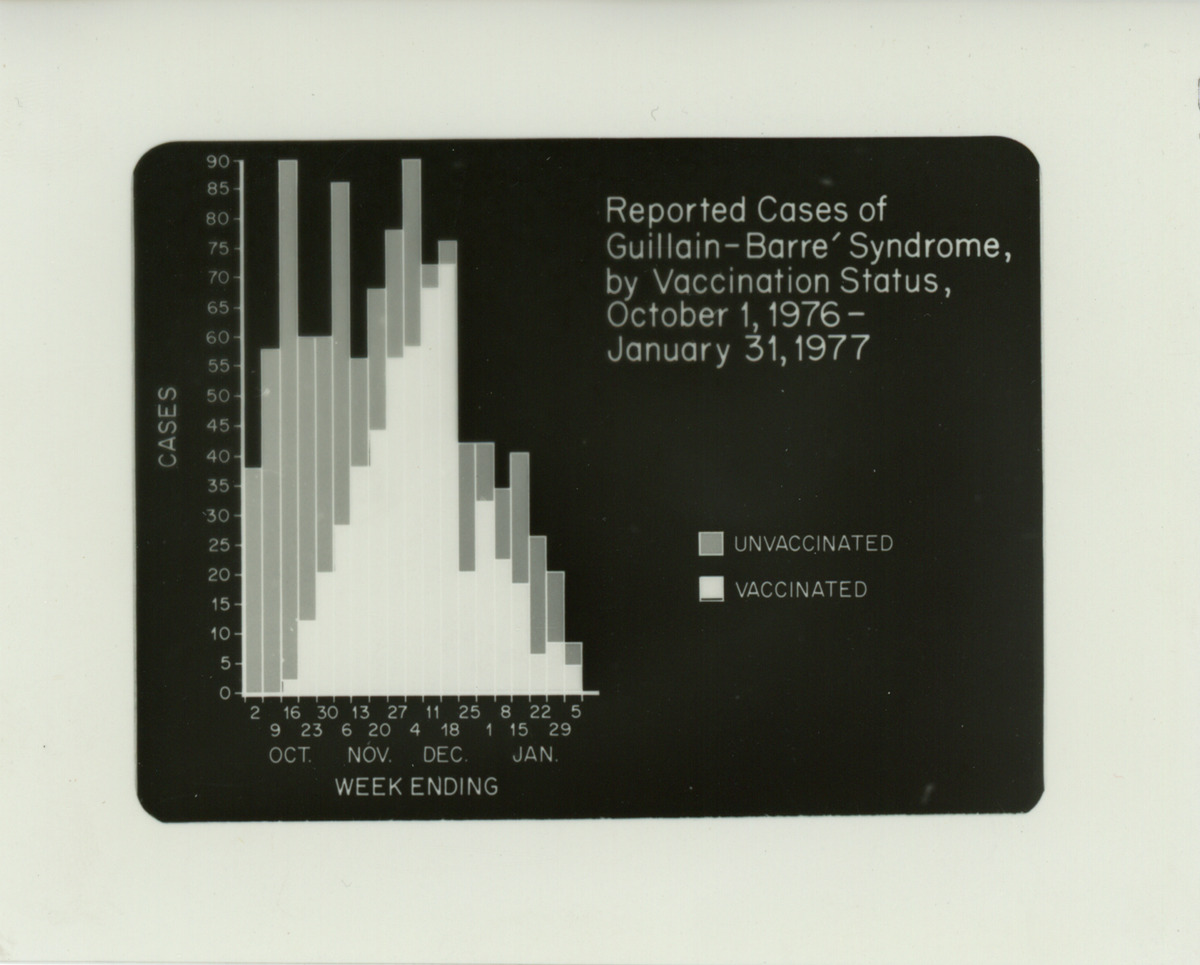 By October 10, 1976, approximately one million Americans had been immunized. Local clinics were set up around the country to immunize as many people as possible. Most people who were vaccinated had no adverse effects. A few deaths that occurred after vaccination were thoroughly investigated by CDC and found not to be vaccine related.

In late November 1976, however, CDC received reports of Guillain-Barré Syndrome (GBS) occurring in some people after they had received an H1N1 swine flu vaccine. GBS causes temporary or, rarely, permanent paralysis or death. CDC epidemiologists investigated, and found a small increase in incidences of GBS in people recently vaccinated with the 1976 H1N1 vaccine. Despite this, there was widespread speculation that the GBS cases were related to flu vaccination. Public health officials called for the end of the National Influenza Immunization Program. 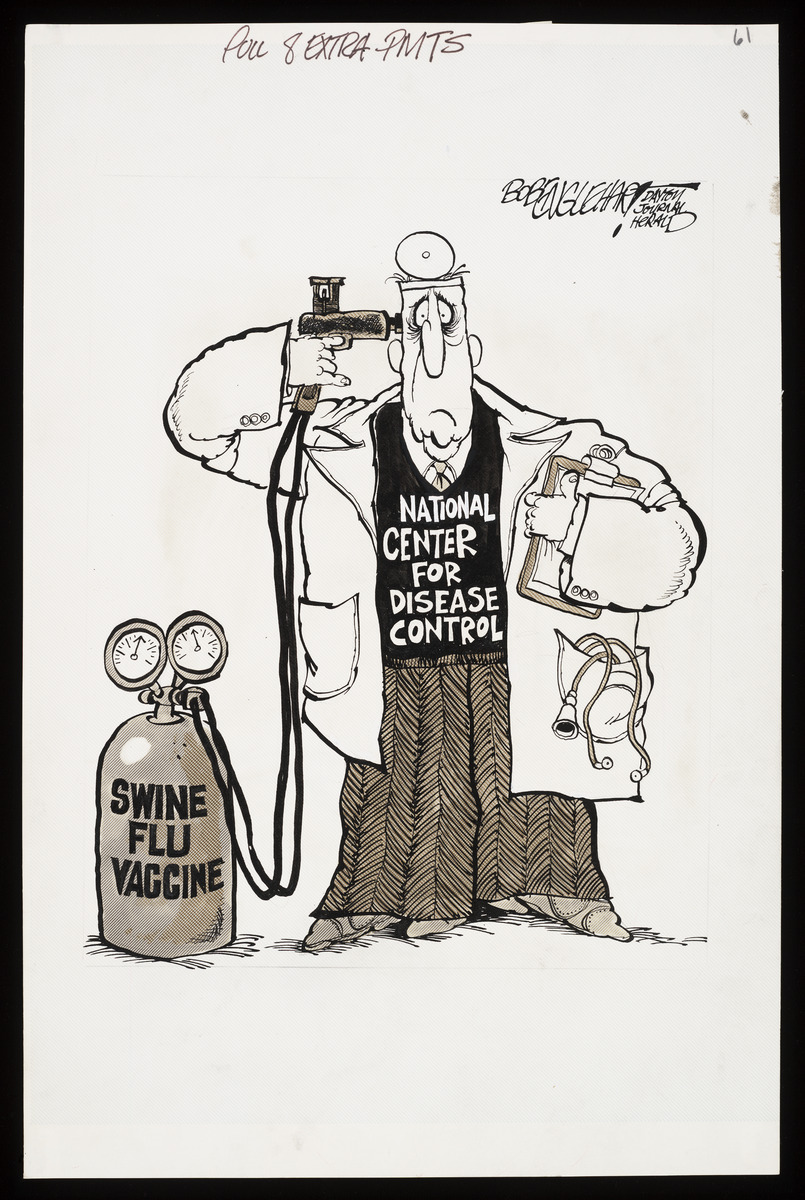 Satirical depictions of CDC arose after the National Influenza Immunization Program ended. Media outlets would label the program a “fiasco” for decades.

In the summer of 1976, before NIIP was launched, the program faced criticism from top scientists and the media alike. Many cited that they believed the program was an overblown reaction to the outbreak at Fort Dix and advocated for a vaccine to be created and stockpiled in case the outbreak spread.

After NIIP was halted in December 1976, CDC faced a flood of criticism from all sides. The New York Times called NIIP a “fiasco” - a label that has stuck with NIIP for years. Claims that the swine flu vaccine had caused a variety of illnesses – from Guillain-Barré Syndrome to heart attacks to influenza-like illness – flooded CDC. The law allowed for people who claimed that the swine flu vaccine had injured them to file claims against the federal government rather than vaccine manufacturers. By May 1980, more than 3,000 claims seeking over $3.5 million dollars in damages had been filed. Congress launched a number of hearings to determine what went wrong during the program.

A shocking blow was delivered to CDC when Dr. David Sencer, then director of CDC, was fired on national television for his role in the program.

The Opening of the Flu Season: A Look at the Preparations and Repercussions of the Swine Flu Vaccination Program, 1977

In 1977, Pacifica Radio, a community supported radio station based in California, aired this satirical program. In this short comedy sketch, Dr. David J. Sencer, CDC Director during the National Influenza Immunization Program, kicks off the influenza season in a fictitious football game which ends disastrously.

Courtesy of the Pacifica Radio Archives 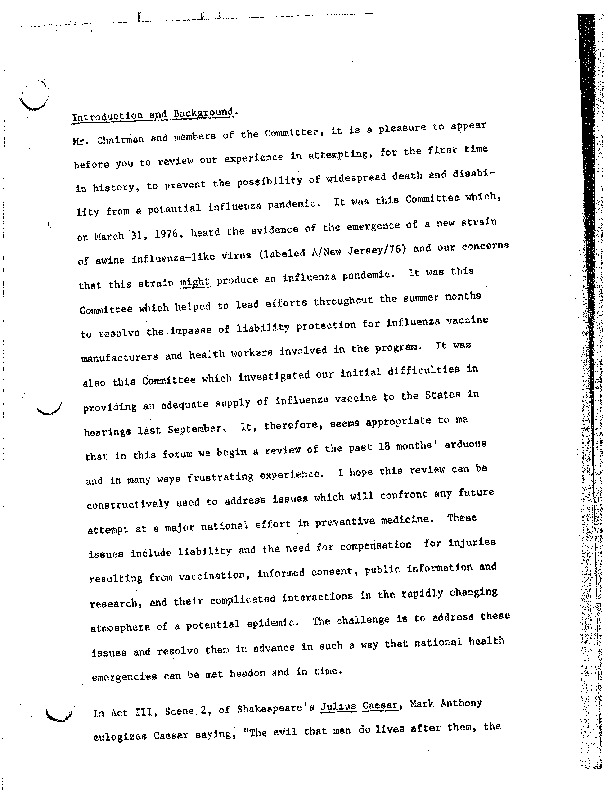 Click on the image to read the entire congressional testimony

Congress held hearings to review CDC's experiences "in attempting, for the first time in history, to prevent the possibility of widespread death and disability from a potential influenza pandemic." Dr. J. Donald Millar was called to testify about the challenge, obstacles, frustrations, and lessons learned.

In the wake of the National Influenza Immunization Program (NIIP), CDC began to reevaluate its influenza preparedness strategies. The need for improvements in evaluating pandemic risk, clarifying influenza health communications, and strengthening the pandemic preparedness network were just a few lessons learned from NIIP.

In 1977, a federal interagency workgroup, including CDC, was formed to increase cooperation among federal agencies for all preparedness efforts. The workgroup drafted the first U.S. influenza pandemic plan.

Dr. Sencer in His Own Words

On February 7, the new secretary of Department Health, Education and Wellness, Joseph A. Califano, announced the resumption of immunization of high-risk populations with monovalent A/Victoria vaccine that had been prepared as part of the federal contracts. On live television, he dismissed the director of CDC, Dr. David J. Sencer.

Dr. Sencer strongly believed that the outbreak at Fort Dix was the beginning of a pandemic. Even years later, Dr. Sencer believed that CDC had taken every action it should have to protect the public’s health and that the lessons learned from the National Influenza Immunization Program would have a lasting effect on influenza preparedness.