CDC’s Influenza Division provides its findings about circulating influenza viruses to other WHO Collaborating Centers, regulatory laboratories, and key national laboratories and academies. CDC participates in discussion twice a year regarding which viruses will be recommended for seasonal influenza vaccine and helps to identify vaccine viruses for both hemispheres. 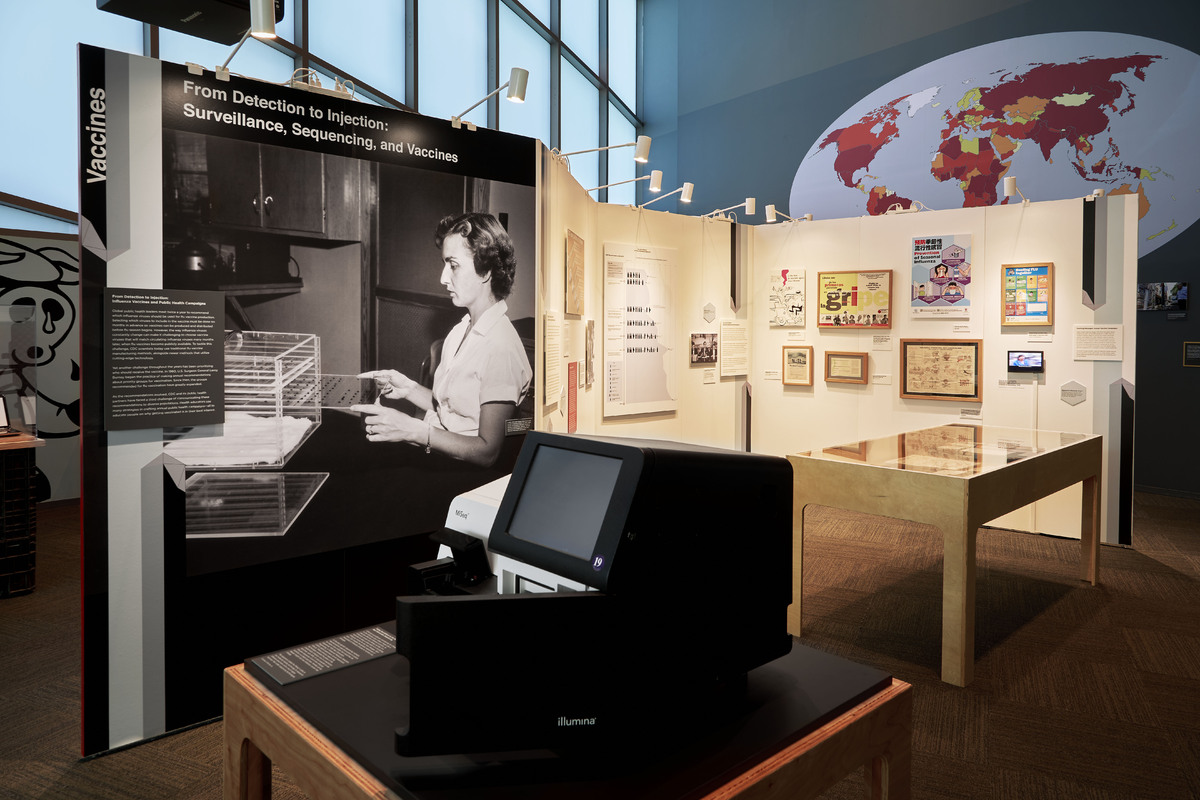 Miseq Sequencer (seen at the center of the photograph) on display in Influenza: Complex Virus/Complex History

Taking Surveillance to the Next Level: Next Generation Sequencing

In the past, genetic sequencing methods required patient specimens grown in culture to create a virus isolate that could then be sequenced. With Next Generation Sequencing, or Advanced Molecular Detection (AMD), patient specimens can be sequenced directly. Where previous sequencing technologies revealed the genes of the predominant influenza virus in a respiratory specimen, with AMD, it’s now possible to see the gene sequences of all of the influenza particles in a single specimen, thereby giving deeper insight into how influenza viruses may change.

This sequencer (called the Miseq) is able to use molecular testing technology to sequence influenza specimens from patients with a much higher accuracy than older sequencing technologies.

Sequencing Influenza Viruses from Around the World

Each year, CDC sequences thousands of influenza viruses to monitor for any change in the genome in the influenza viruses as part of CDC’s role as a World Health Organization Collaborating Center for Surveillance, Epidemiology, and Control of Influenza. This phylogenetic tree shows CDC’s work sequencing surveillance of just one influenza virus subtype: influenza A(H3N2). Since 2005, CDC has recorded a total of 10,000 nucleotide sequences of the influenza A(H3N2) virus that have been arranged on the tree. The tips of the branches of the phylogenetic tree are colored by geographic region, showing just how widespread CDC sequencing surveillance is. The gray bands represent the Northern hemisphere’s flu season.

The chart below the phylogenetic tree shows the data on influenza A(H3N2) gathered by CDC across time, again colorized by geographical region. In 2014, after the implementation of Next-Generation Sequencing at CDC, the data dramatically increases.