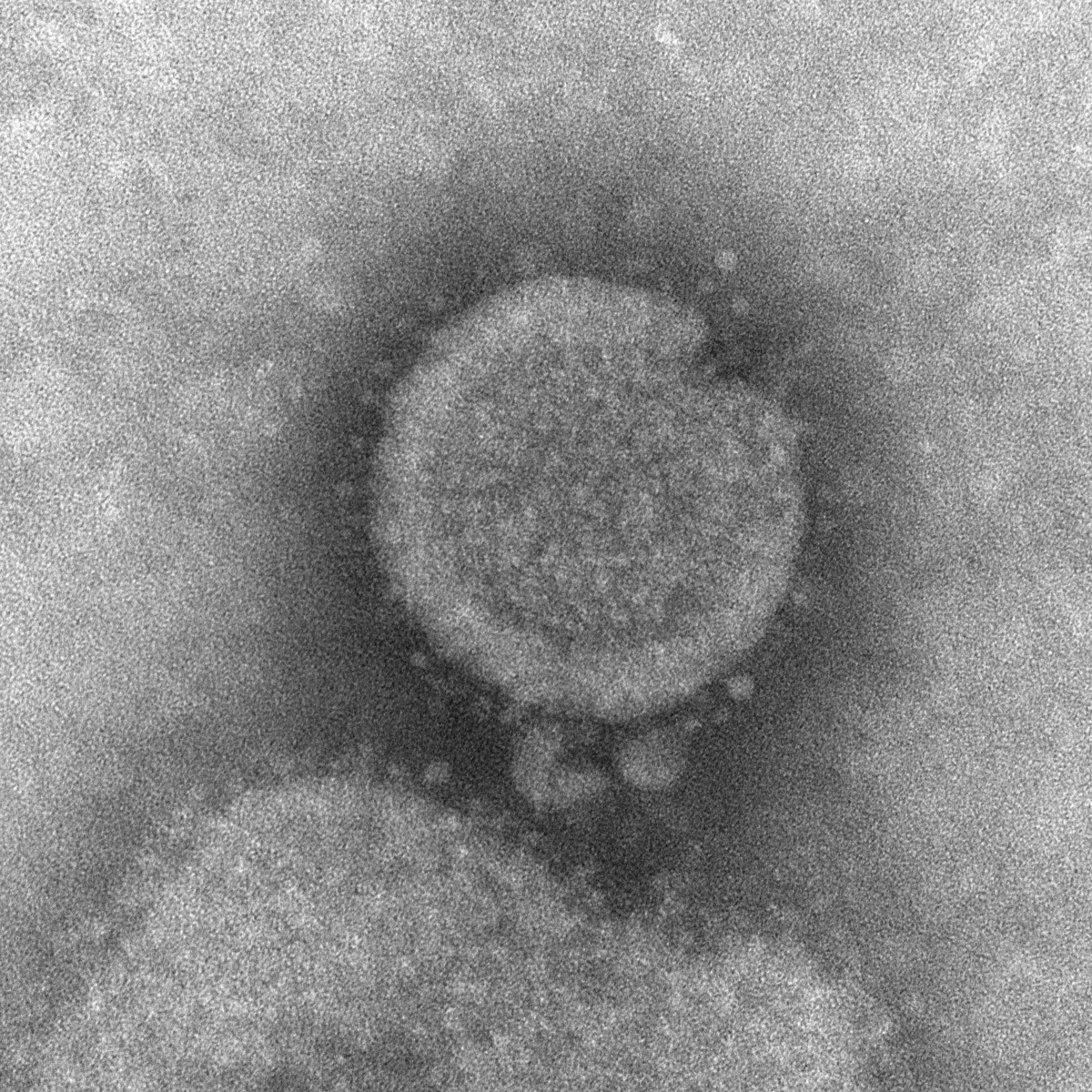 A transmission electron microscope (TEM) image of influenza A H7N9

In 2013, another novel influenza virus with avian origins (H7N9) emerged to cause human illness across multiple provinces of China. Within two months, the number of human H7N9 infections equaled the number of human H5N1 infections that had been reported over ten years. CDC worked closely with China CDC to respond to this emerging public health threat. While human infections with H7N9 have declined in recent years, to this day H7N9 remains the number one threat for a potentially severe influenza pandemic.

CDC participated in the global response to the emerging H7N9 public health threat. CDC staff occupied the Emergency Operations Center (EOC) in April 2013 so that public health experts from across CDC could gather to coordinate the complicated response.  No U.S. cases were detected, and staff left the EOC in June. CDC, WHO and China CDC continue to be on the alert for any new human H7N9 infections in the world. 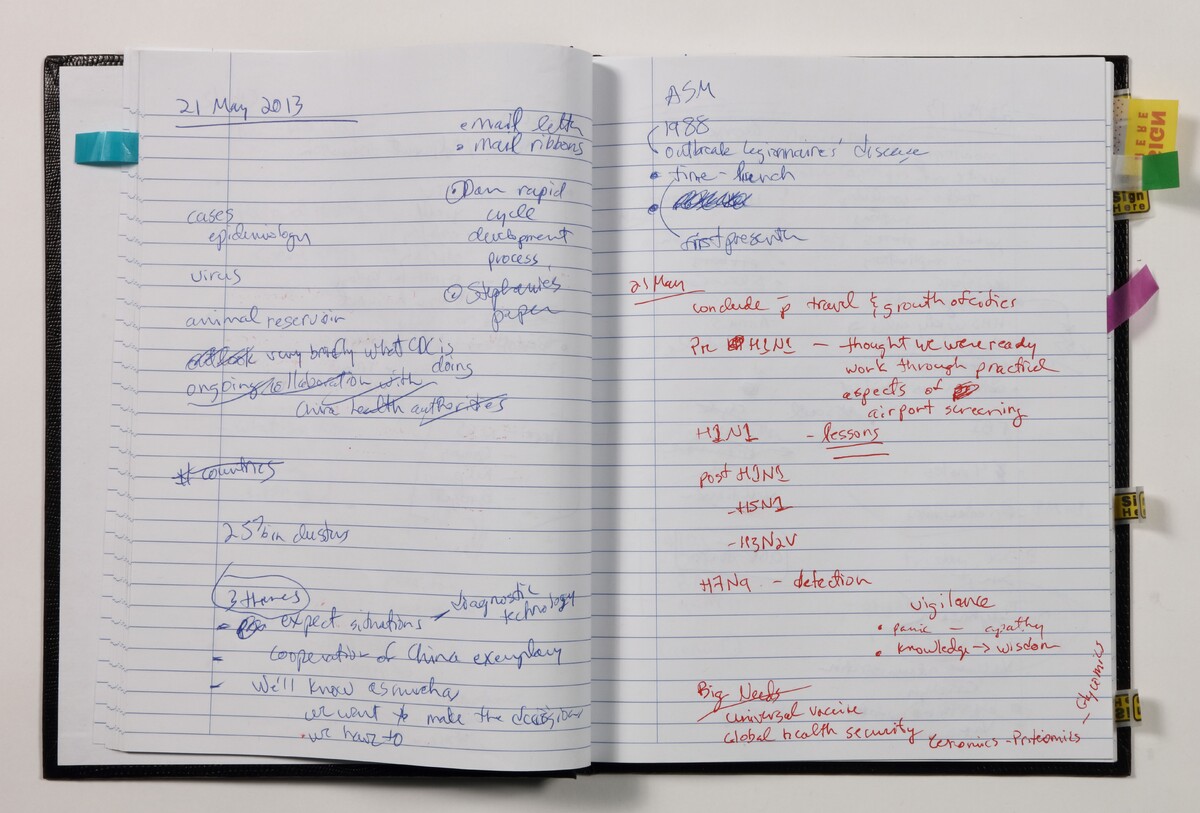 What it takes to Coordinate a Response:  EOC Incident Manager notebooks used by Dr. Stephen Redd, 2013

Dr. Stephen Redd served as the incident manger in the CDC Emergency Operations Center (EOC) for the H7N9 response. His notebooks provide a glimpse into the extensive and fast-paced work required to respond to an international public health emergency.

During the H7N9 response, Dr. Redd noted that there was considerable interest in comparing the EOC activities between the earlier 2009 H1N1 pandemic and the 2013 H7N9 response. Unlike in 2009, when the H1N1 virus spread easily from person-to-person, in 2013, H7N9 did not. The CDC staff occupied the EOC, as there was a strong concern that the H7N9 virus might change from a virus spread through contact with infected birds to one that easily spread from person-to-person. 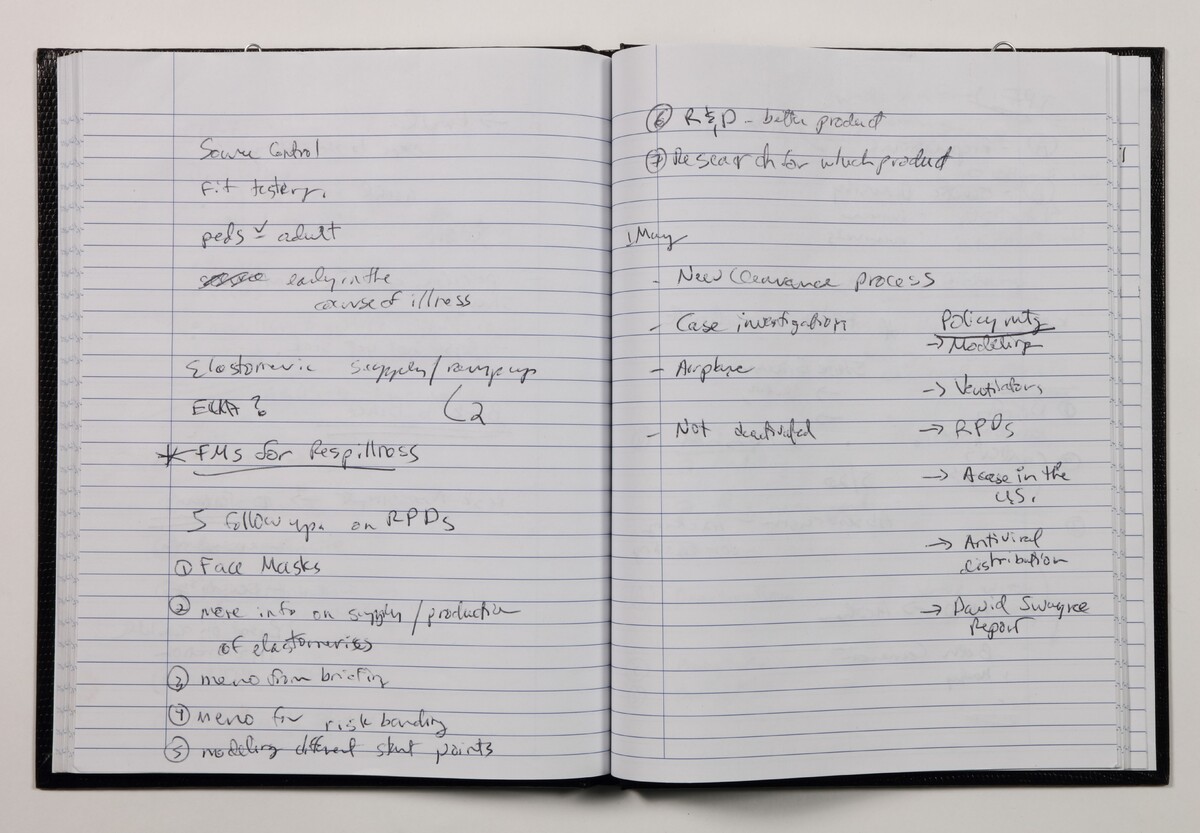 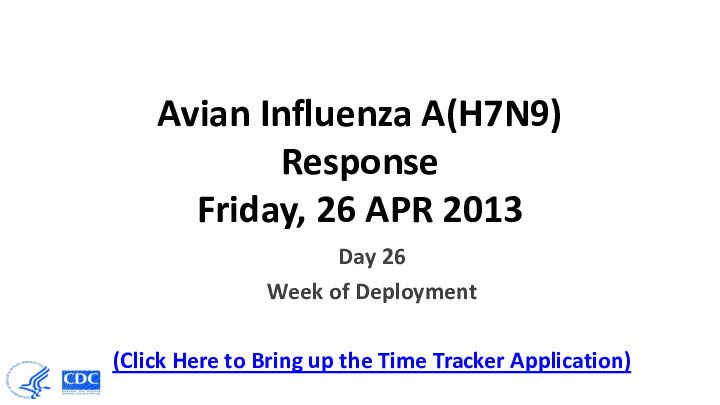 Each day, those working on the H7N9 response were kept up-to-date through response briefs presented through PowerPoint. 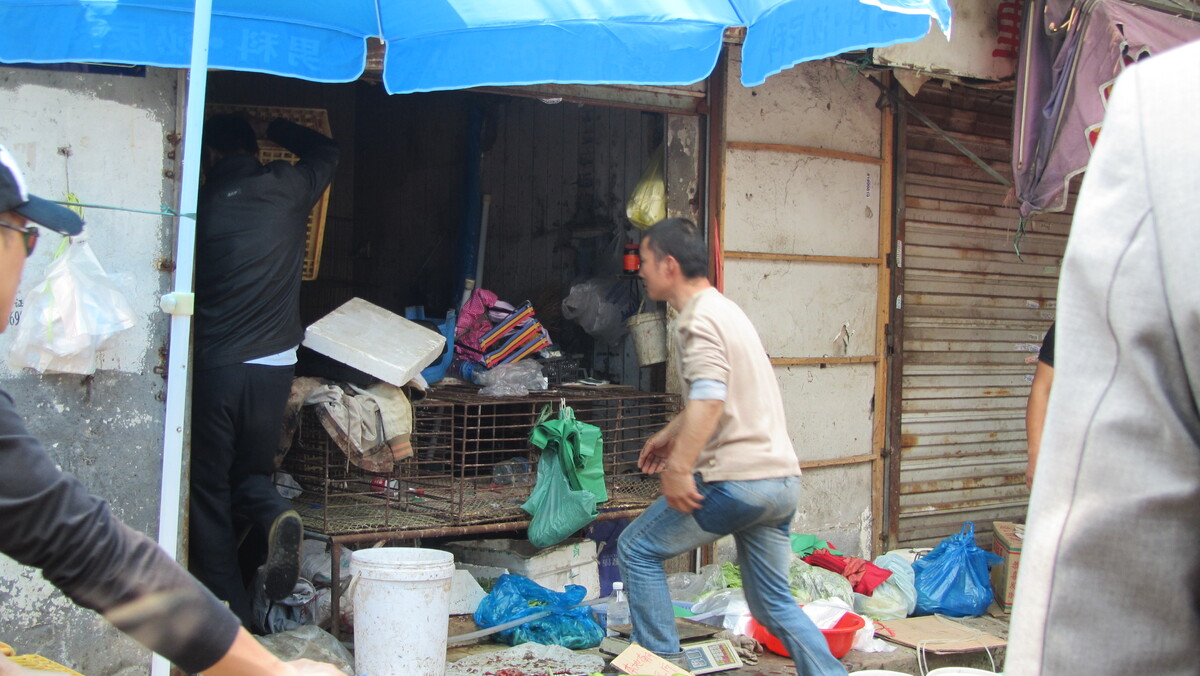 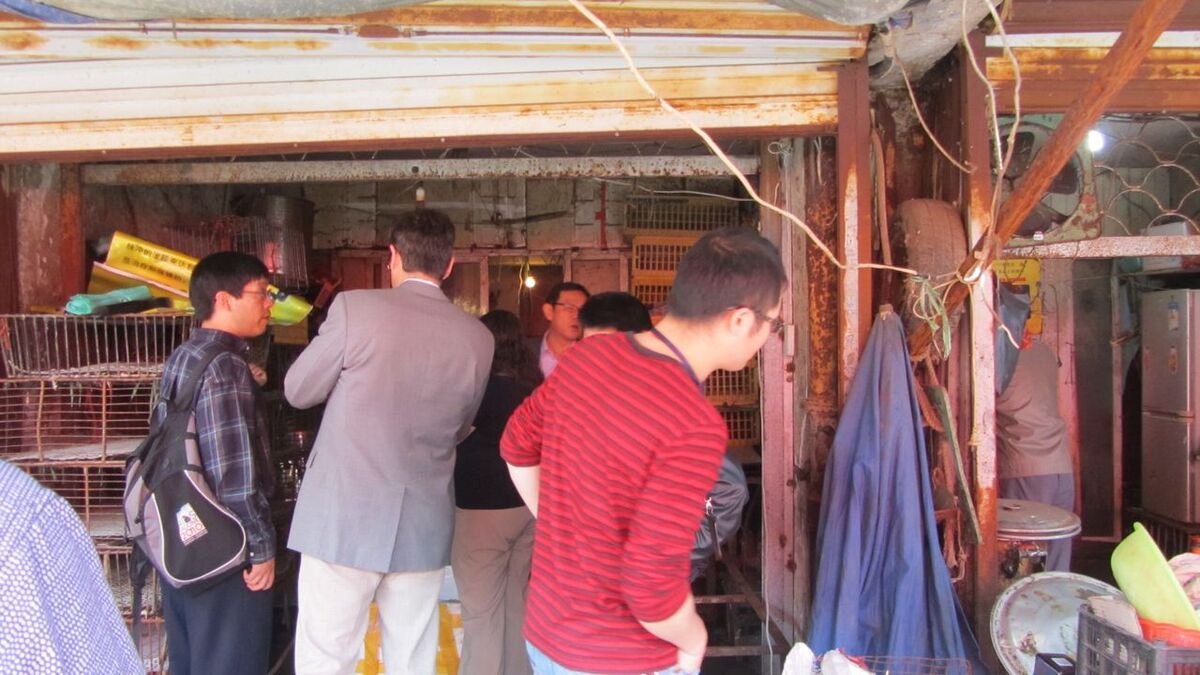 Snapshots of CDC Partnerships in Action

In the early days of the H7N9 outbreak in 2013, China CDC invited CDC to help in its investigation. Vital questions such as the extent of the outbreak, the severity of the disease, and if the virus could change to one that easily spread from person-to-person were still unanswered at the time. To help search for the answer to these questions, CDC’s Dr. Fiona Havers and Dr. Marc-Alain Widdowson provided technical assistance to China CDC.

While working as part of a team with China CDC, Drs. Havers and Widdowson helped design a case-control study to examine what type of exposures at live bird markets would put people at risk of catching H7N9.

Here, Dr. Widdowson enters a vendor’s stall at a market with Dr. Dale Hsu, Director of the Division of Global Health at U.S. CDC based in China, and Dr. Feng Zijian, Deputy Director of China CDC. 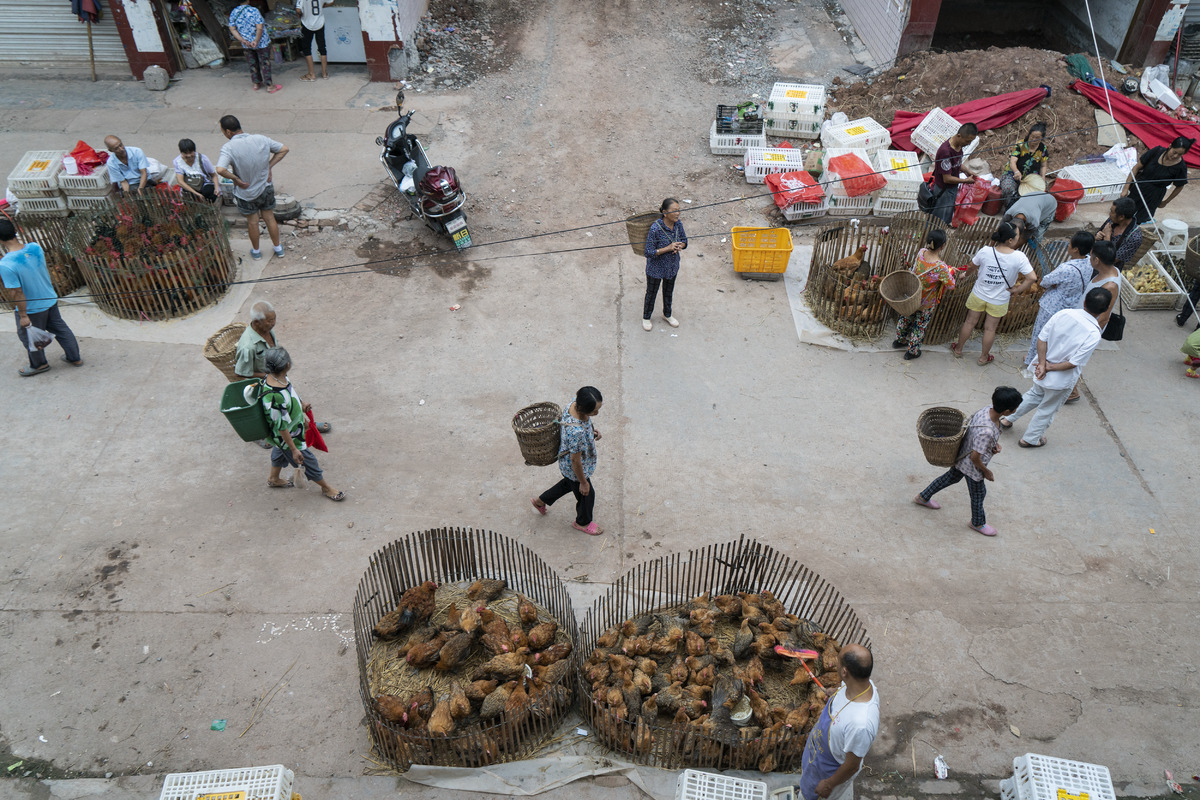 Live poultry markets, where people can choose live poultry that is then slaughtered for them, are popular in China. At these markets, people come into close contact with birds.

Markets where people and non-infected birds are in close contact with birds that may be infected with avian influenza are the main setting where human H7N9 infections occur. To reduce human infections, public health authorities called for the closure of some of these markets, putting pressure on local economies.

In the past, some outbreaks of influenza have led to social stigma towards people and places despite evidence showing that there is no greater risk among the group than the general population.

In 1957, the virus that triggered the pandemic was called “the Asian Influenza” virus in popular media and in scientific publications, associating the virus with Asia. In 1968, despite the protests from Huang Mong-hua, a Hong Kong city counselor, media outlets and scientific publications, including publications by CDC scientists, called the virus the “Hong Kong influenza virus.” In 2009, some Mexican citizens were stigmatized as disease carriers. Asian Americans in the U.S. and Chinese citizens were stigmatized during the COVID-19 pandemic, many citing China’s past history with avian influenza and poultry markets as a precursors to COVID-19.

Public health emergencies, such as the outbreak of COVID-19, are stressful times for people and communities. Stigma affects the emotional or mental health of stigmatized groups and communities in which they live. Stopping stigma is important for keeping communities and community members resilient. 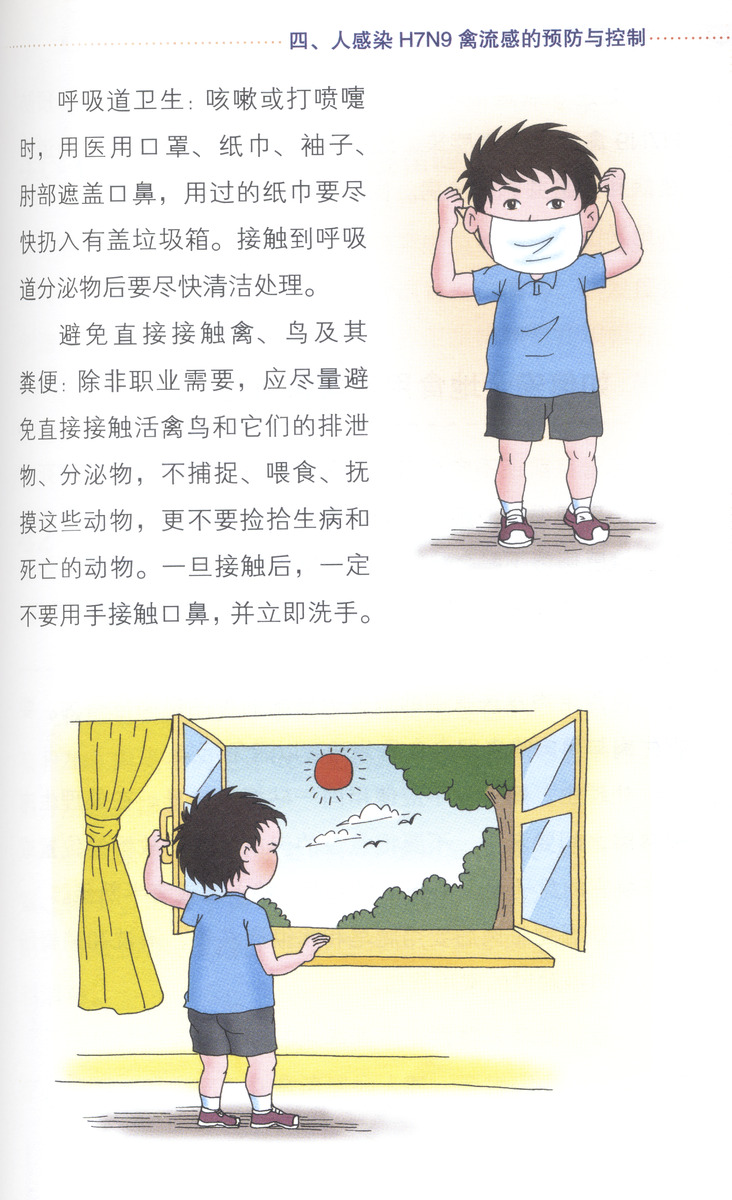 A page from a health communication pamphlet encouraging people to participate in good health practices, China, 2013

Click on the photograph to read through the publication

Educating the Public about H7N9

One of the most crucial aspects of any public health response is making sure the public is armed with crucial information about the outbreak. The second week of April 2013, China began to post epidemiological information on its official sites so that the public could be alerted to the rapidly evolving epidemic. Health communication booklets helped present information about H7N9 in a way that was informative and entertaining.