Pandemic Effects on Communities throughout the U.S. 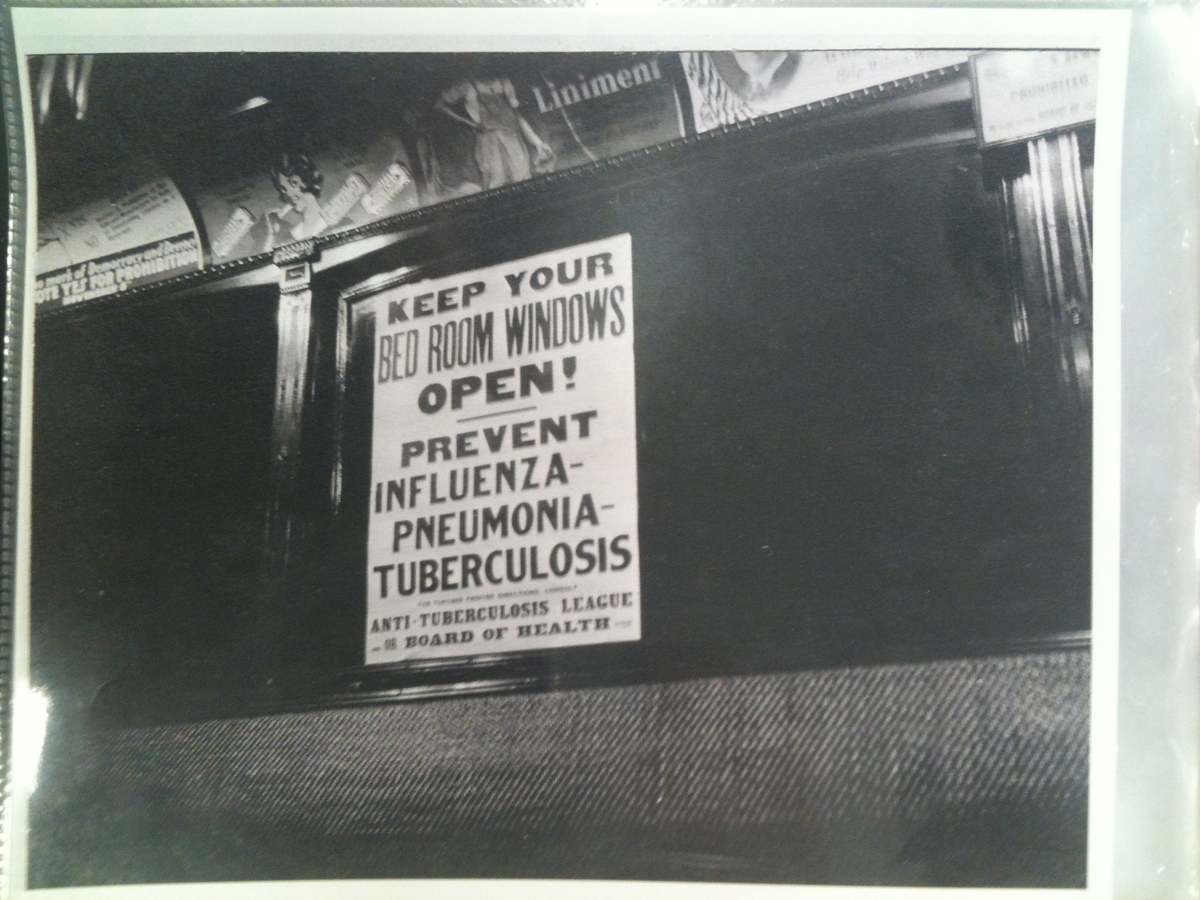 Millions of pamphlets and posters circulated to educate the public and medical communities about influenza. This poster was placed inside a subway car in Cincinnati, Ohio.

Courtesy of the National Archives and Records Administration, photo no. 165-WW-269B-22

A Patchwork of Response Efforts

Without a doubt, the 1918 pandemic affected all communities throughout the U.S. in different ways. While some communities could effectively enforce what we today would recognize as social distancing measures (encouraging the cancellation of public gatherings and the closure of restaurants and shops), some communities could only institute a few measures to slow down the pandemic. Worried about affecting public morale during the final months of World War I, some community leaders chose to do nothing to stem the spread of influenza infections in their communities. 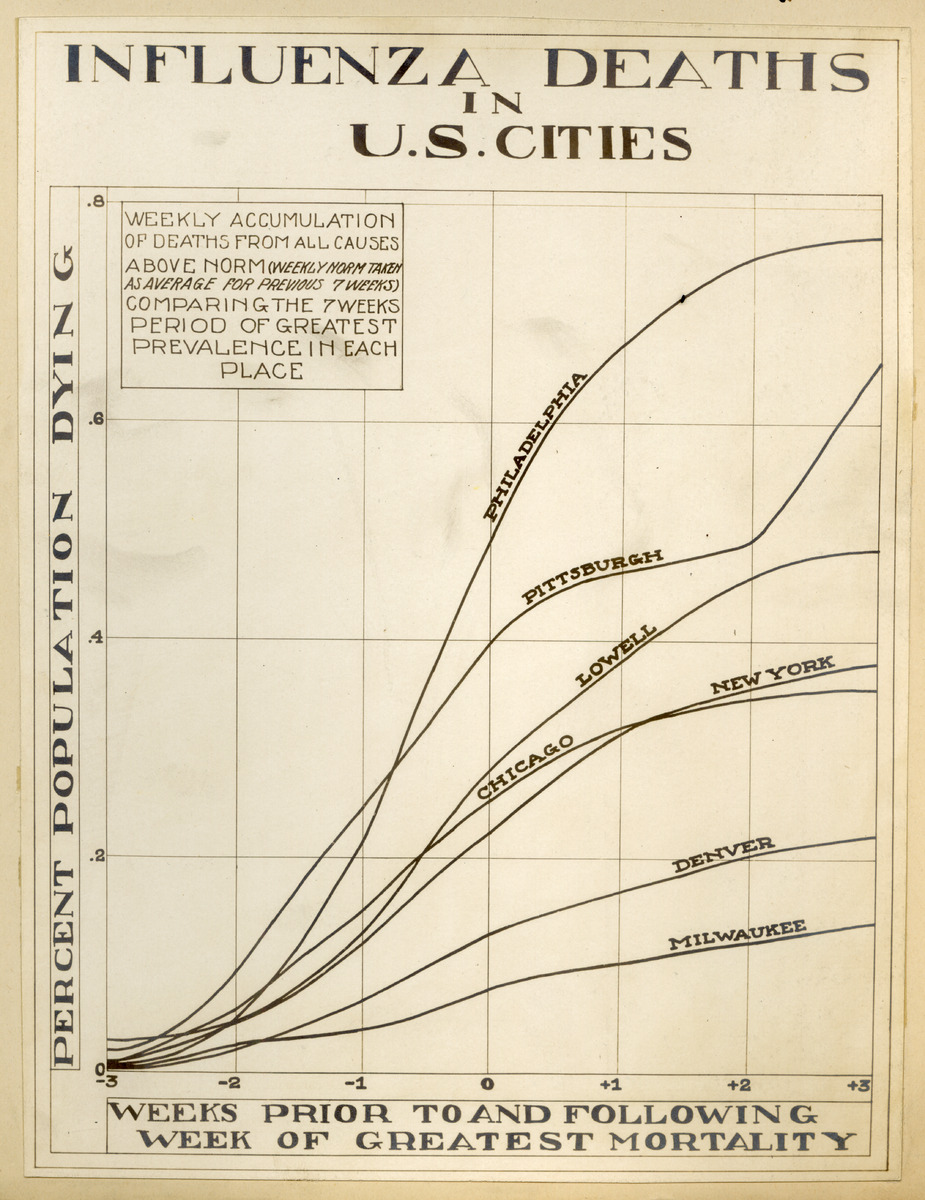 Philadelphia experienced a sharp rise in mortality during a second wave of the pandemic in October 1918. Traditional funeral and burial customs were disrupted. More than 500 corpses awaited burial, some for more than a week, and cold-storage plants were used as temporary morgues.

The city saw an increase in mortality after the Fourth Liberty Loan Drive parade held on September 28, 1918. The event was aimed at encouraging Philadelphians to buy Liberty Bonds – governmental bonds sold to aid the war effort during the final months of World War I. Within 72 hours after the parade, all hospital beds in each of Philadelphia’s hospitals were filled with persons suffering from influenza infection.

In October 1918, as cases began to rise throughout the city, the San Francisco Board of Health issued several recommendations with the hope of stemming the spread of the influenza virus. Recommendations to citizens included avoiding public transportation during rush hour, avoiding crowds, and paying attention to personal hygiene. San Francisco’s mandate for citizens to wear masks in public was the “centerpiece” of the city’s response to the pandemic.

On October 18, 1918, Health Officer Dr. William Hassler ordered anyone who worked with the public to wear a mask while at work, and, on October 21, 1918, urged citizens to wear masks when out of their homes. A Red Cross public service announcement stated, “the man or woman or child who will not wear a mask now is a dangerous slacker.” “Slacker” was a derogatory term used for individuals perceived as not supporting the war effort. Mask wearing quickly became a symbol of wartime patriotism. Many citizens wore their masks while in public, while those who did not were chastised by the police. Influenza infections fell as a result.

Anti-mask sentiments arose in San Francisco with some influential citizens forming the “Anti-Mask League.” The League held at least one event attended by more than  2,000 people to denounce the mask ordinance.

After the mask mandate was lifted in November 1918 and public entertainment and schools reopened, the city saw a resurgence in cases. Hassler believed the resurgence was a result of out-of-town travelers visiting the city, prompting the health officer to recommend, but not mandate, the public to don masks again. A mask mandate was issued one final time in January 1919, and then lifted in February 1919. Statistics released by the Public Health Service showed that San Francisco had suffered just as badly as other major U.S. cities. 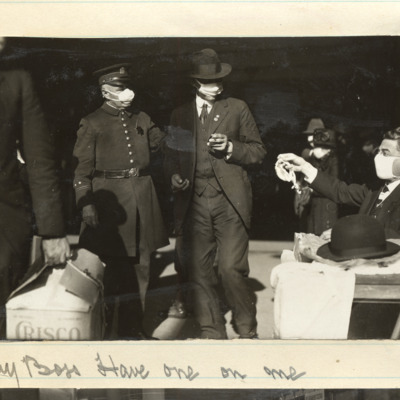 Man wearing a flu mask at a table attempting to give masks to passersby. 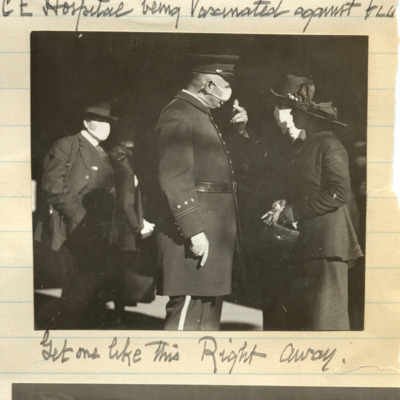 A policeman wearing a flu mask warns a woman to wear a flu mask. 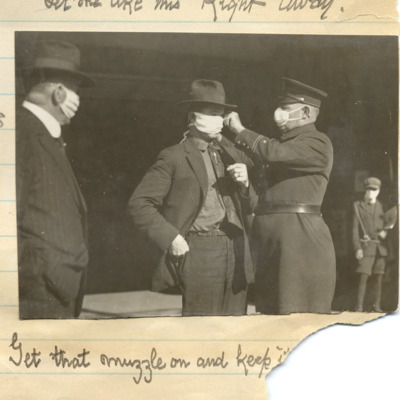 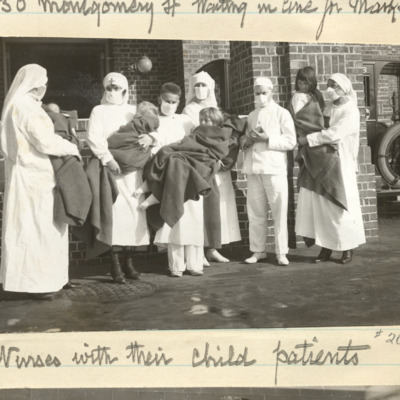 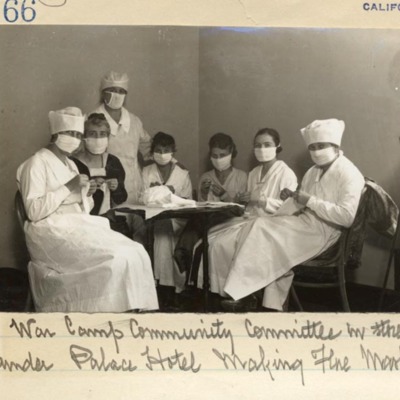 Portrait of women members of the War Camp Community Committee sitting in a room making flu masks while wearing masks. 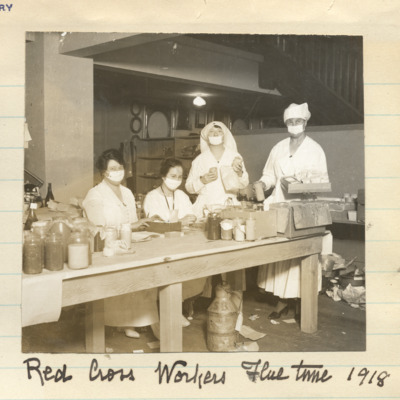 Masked Red Cross workers at a table with jars and boxes. 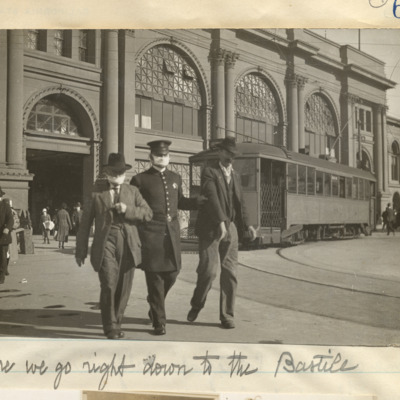 A policeman wearing a mask leads two men by their arms away from the Ferry Building. 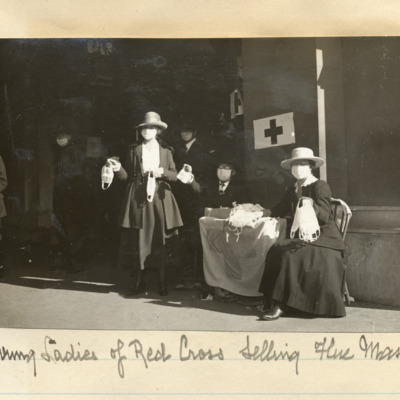 Portrait of a masked Red Cross nurse wearing a mask and holding a child. 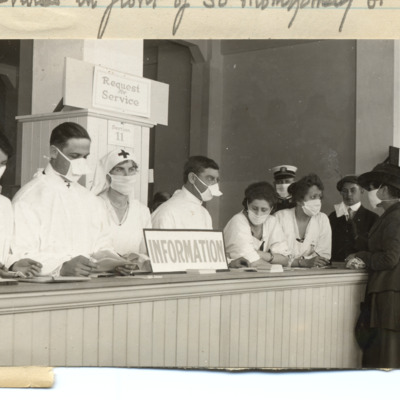 A reception desk at a hospital in San Francisco. 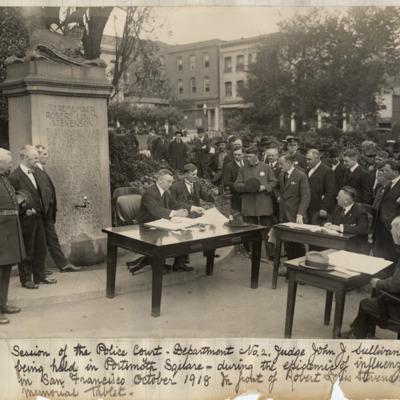 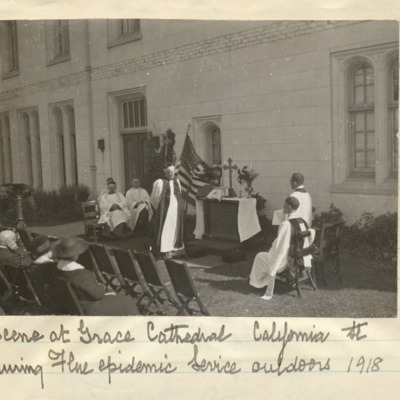 The clergy of Grace Cathedral hold services outside during the 1918 influenza pandemic. 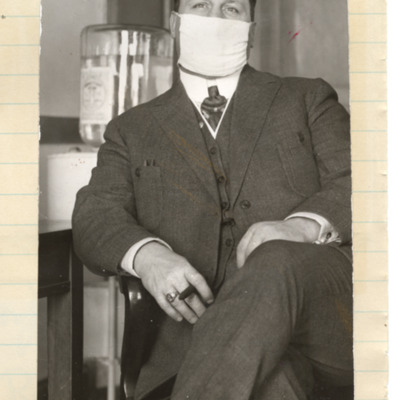 Firsthand Accounts of the 1918 Pandemic in Different Communities Across the U.S.

Excerpt from We Heard the Bells: The Influenza of 1918, U.S. Department of Health and Human Services, 2010