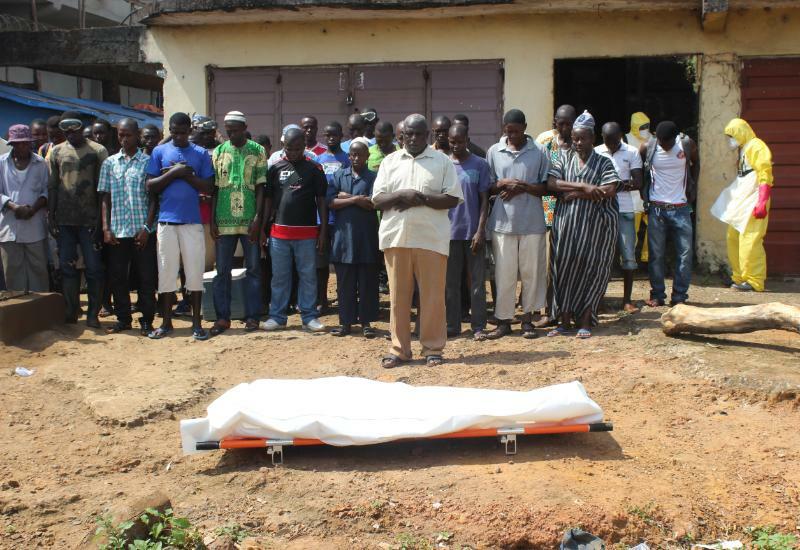 The family of the deceased look on and say a prayer before the body is removed for safe and dignified burial in Sierra Leone, November 7, 2014. From October 2014, families were allowed to attend burials again, and to invite an imam or minister to pray at a safe distance. Photograph by Lisa Pattison, IFRC

As the response evolved, burial protocols embraced the concept of safe and dignified burials. Groups of locally-staffed, specially-trained teams handled the emotional duty of safely removing bodies from people’s homes. These teams worked to observe family and community customs, and, at the same time, ensured that the dead were buried in a safe manner. In the best scenario, when called to a home, the burial teams would first meet with the families of the deceased. They offered condolences and consulted with the families, making sure they approved of the burial process. Then, while some team members remained with the families, others prepared for the burial. They dug graves to a safe depth of 8 feet, often together with community members, and donned their protective gear. Then they carefully moved and buried the dead bodies. Families were able to observe the burials and say prayers from a safe distance.

A proper, dignified burial with meaningful acts of closure restored a tiny sense of normalcy to a mourning process heavily impacted by medical protocols. When family members participated in a respectful burial experience, they told their friends.  People in the community then became more willing to turn over the bodies of their loved ones to burial teams. 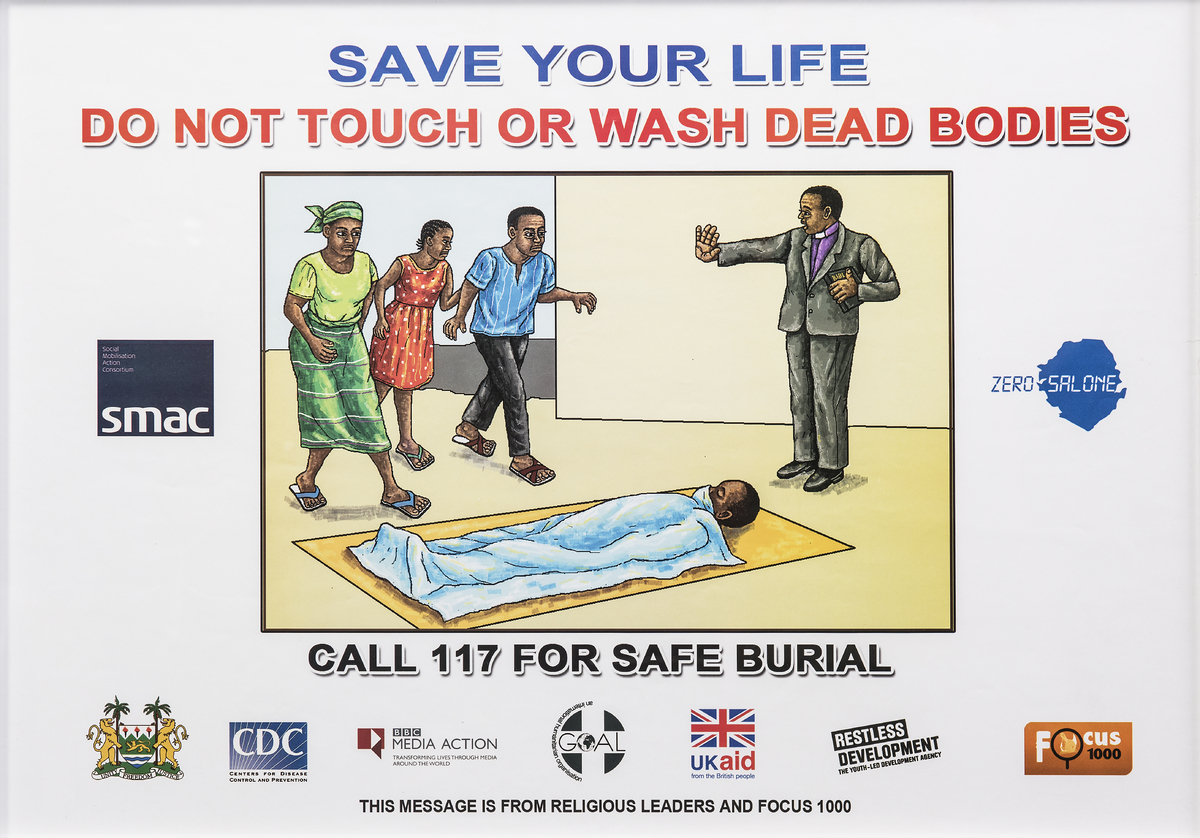 Save Your Life: Do Not Touch or Wash Dead Bodies poster illustrated with a minister, courtesy of FOCUS 1000 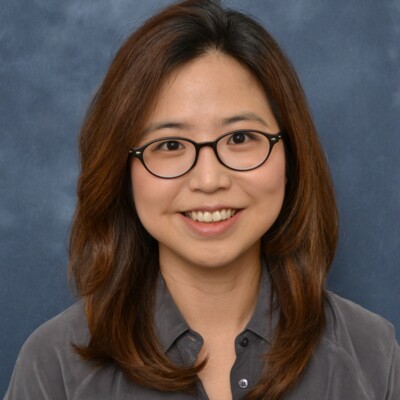 Dr. Seung Hee Lee, deployed to Sierra Leone as part of CDC's health communication and promotion team, discusses some burial practices and emotion that had to be addressed in Sierra Leone in ensuring safe and dignified burial. (Transcript) 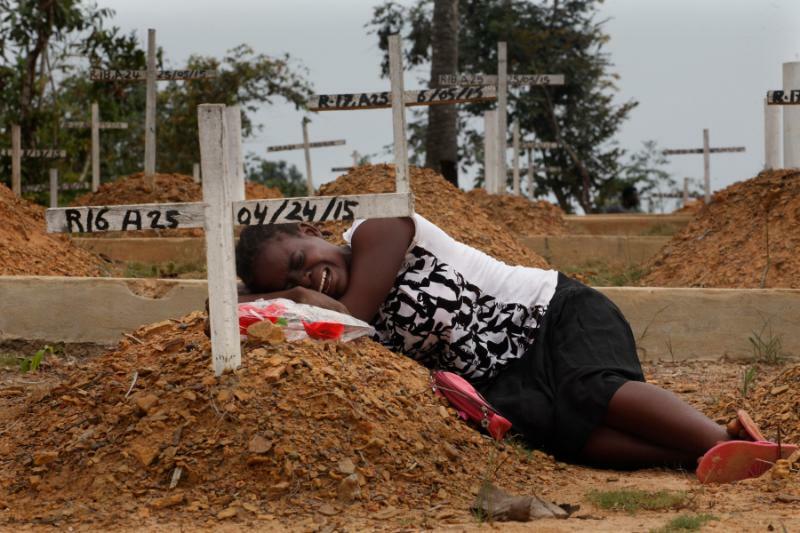 A woman grieving at the grave site of a loved one buried on Decoration Day in the Liberian National Cemetery, March 9, 2016. Photograph by Dominic Chavez, courtesy of the World Bank

In Liberia in August and September 2014, the numbers of people dying as a result of the outbreak were too many for burial teams to keep up with. As a result, highly-infectious bodies were left in the streets. In August 2014, the President of Liberia made the decision to introduce cremation—an affront to traditional burial practices and a cultural taboo. The Hindu community offered the use of its crematorium, and all bodies were cremated—even when Ebola had not been confirmed as the cause of death. 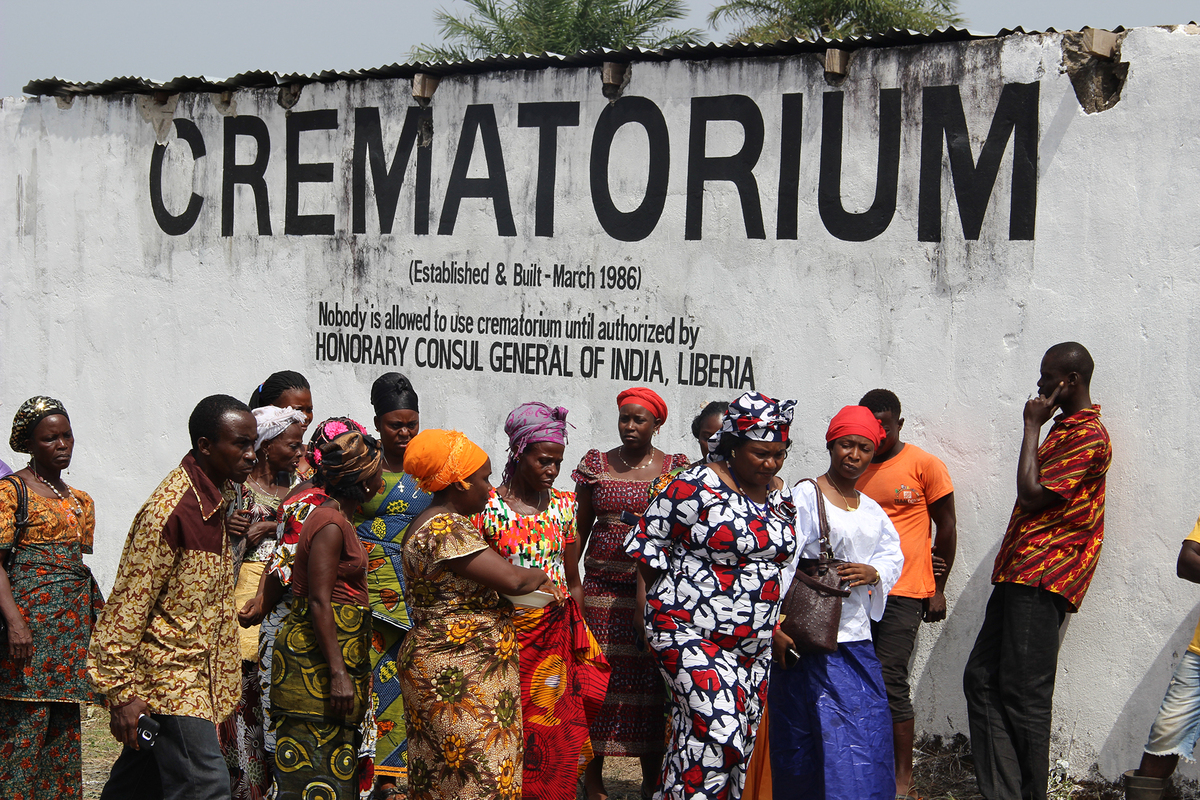 Liberians walk past the Hindu Crematorium on March 7, 2015 where loved ones were cremated early in the epidemic due to a shortage of burial sites.  Courtesy of Global Communities

Working with the U.S.-based NGO Global Communities, the Liberian National Cemetery at Disco Hill outside of Monrovia opened in December 2014. The site was purchased by the government of Liberia to provide safe and dignified burials and managed by Global Communities. When the cemetery management was transferred back to the Liberian government in January 2016, over 3,000 people had been buried there. 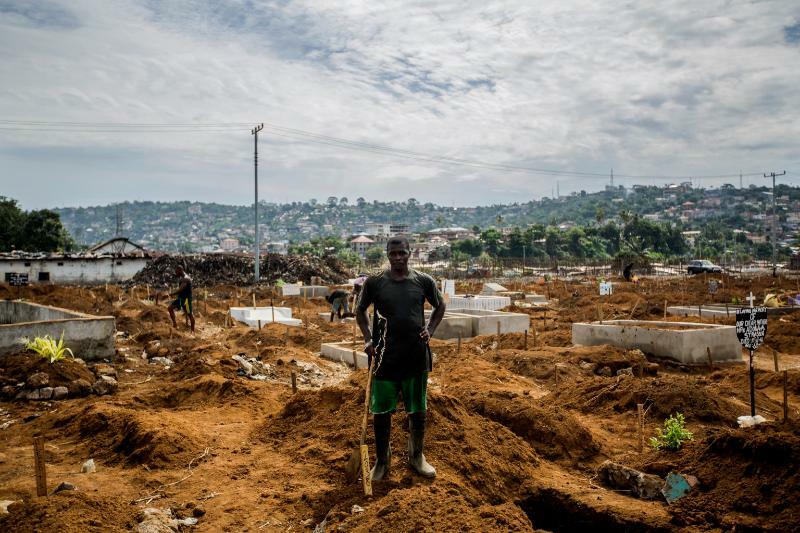 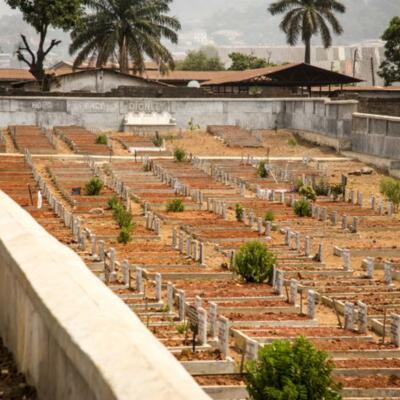 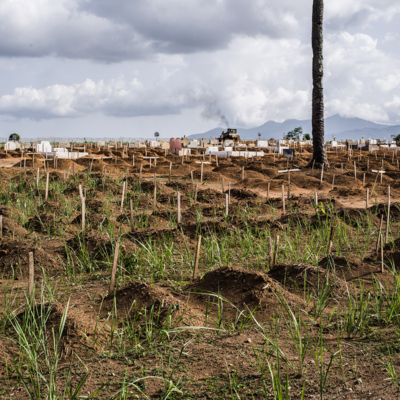 Waterloo Cemetery, Freetown, May 2015, before permanent grave markers were installed. Over 70% of the people buried there are Ebola victims. Photograph by Andrew McConnell, Concern Worldwide

King Tom Cemetery is Freetown’s oldest cemetery. When the crisis hit, it was neglected, crumbling, and overrun with weeds. As the death toll rose, the Sierra Leone government said anyone who passed away must get a safe, medical burial. This meant the dead were taken from homes by trained burial teams wearing full protective gear, put in body bags, and taken to cemeteries, including King Tom.

In October 2014, Concern Worldwide and the International Federation of Red Cross and Red Crescent Societies (IFRC), two international NGOs, took over the burial system in Freetown. Things had become chaotic—burial workers weren’t properly paid or equipped. Families were distraught at the way burials were carried out. Cemeteries struggled to handle the number of bodies, and many graves were not marked or named.

King Tom Cemetery is now clean, and graves are all arranged in order so that family members can get easy access. The cemetery was handed back to city authorities in 2016. To ease the pressure of so many burials, a new cemetery, Waterloo, was also established, which now holds over 10,000 graves.

A Liberian national holiday observed every second Wednesday of March, Decoration Day, honors the dead. Family members visit the graves of deceased loved ones to clean the space and lay wreaths and flowers. Decoration Day was first observed at the Liberian National Cemetery on March 16, 2015.

That year, Decoration Day also fell a few days after the ashes of about 3,000 people cremated at the height of the epidemic were transferred to the Liberian National Cemetery. Traditional leaders first conducted a private ceremony at the crematorium to ask ancestors for forgiveness for the government of Liberia cremation mandate, and to ask for intercession in the successful transfer of the ashes to their resting place. The transfer sought to provide some closure for families traumatized by the hasty cremation of their loved ones. 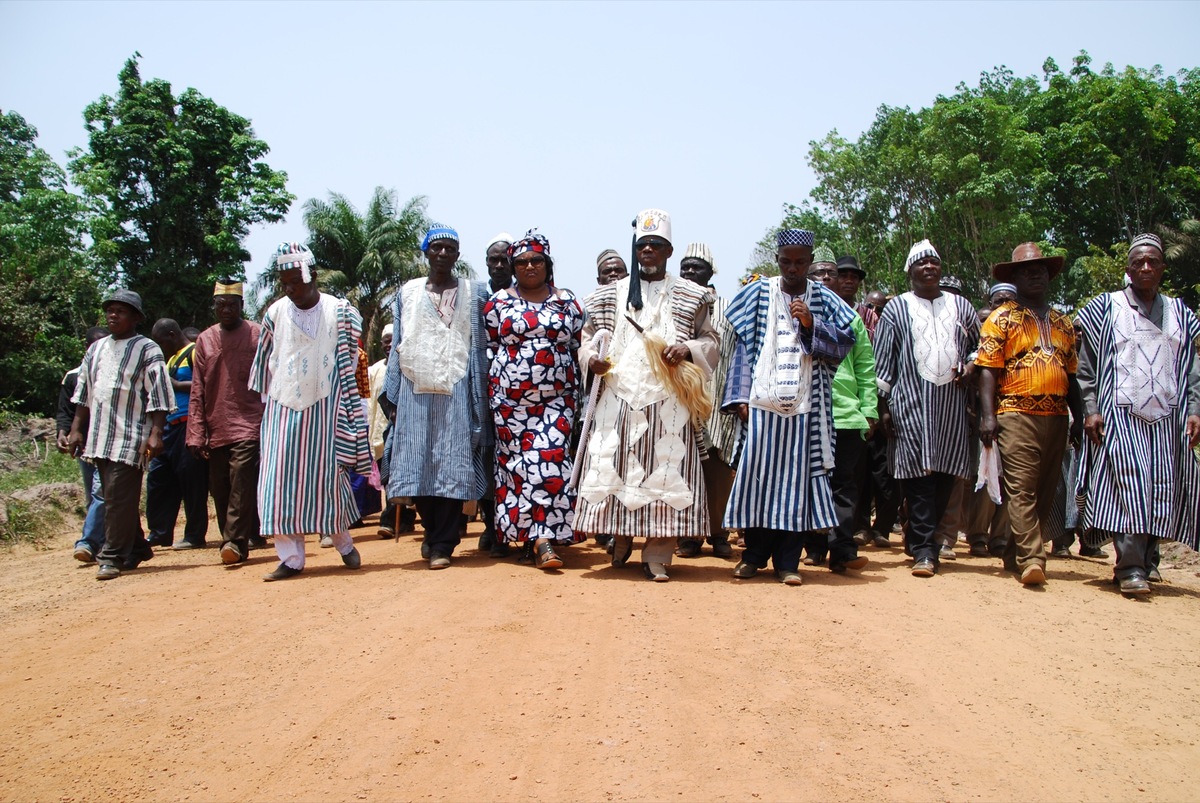 Chief Zanzan Karwa (center), chairman of the National Council of Chiefs and Elders, leads a group of traditional leaders with the ashes of some 3,000 Ebola victims cremated at the height of the crisis, March 7, 2015. Courtesy of Global Communities